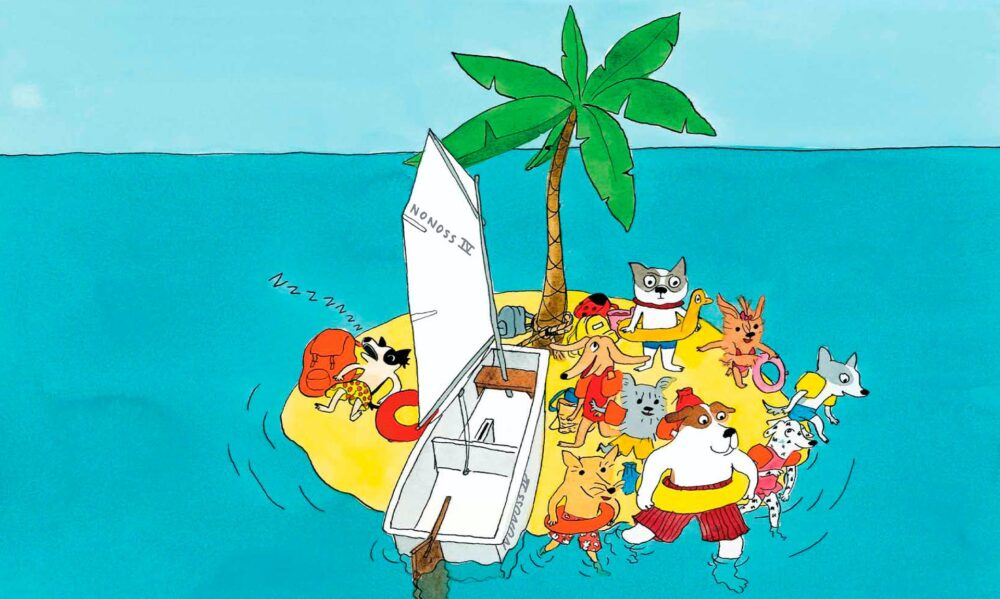 European animation professionals know the summer season is officially over then it’s time for them to get ready for the annual Cartoon Forum pitchfest in Toulouse, France. The event, which takes place Sept. 19-22, promises to be another exciting gathering of toon pros, showcasing 84 new projects from 19 countries.

Picking a few shows out of many wonderful pitches is not an easy task, but we did our best to pick a few of the Cartoon Forum projects that looked quite promising this year:

A Day with the Dogs

This adaptation of the book by Dorothée de Monfreid (Les Toutous) is produced by French studio Dandelooo, which is best known for shows such as Billy the Cowboy Hamster, Stinky Dog and Mum Is Pouring Rain. The charming main character is a good-natured Saint-Bernard whose peaceful life in the countryside is disturbed by eight rambunctious young cousins during the holidays. Director Cedric Guarneri and producers Jean-Baptiste Wery and Emmanuèle Petry-Sirvin are leading the charming 2D preschool show.

Jeremy Barlozzo and Douglas Cavanna are the writer-directors of this offbeat show about an awkward and gullible duck whose life changes when he falls head over heels for the sassy rabbit Jessyfer. Too bad he often listens to the misguided advice of his housemate Pedro the elephant! The 54 x 2′ show, which is intended for young adults and older audiences, is produced by Deadliners Production (Arthur Blanc-Anthonioz) and co-produced by Andarta Pictures (Sophie Saget) in France.

You can always count on TeamTO to bring a cool show to the party, and this year is no exception. Targeting six- to 10-year-old audiences, Next Level: Odyssey mixes the world of gaming with mythology: It follows the adventures of Kiran, who falls through a portal into the world of classic Greek mythology while playing games at the Louvre Museum. Our hero is soon tasked with helping Odysseus get back to Ithaca with the help of a junior goddess Leuki. Inspired by Panique dans la Mythologie by Fabien Clavel and produced by Corinne Kouper, this 26 x 22′ show is definitely one to keep an eye on!

Think of it as a little bitty Friends sitcom for young animal buddies (without the ridiculously affordable New York apartments). Created by artist Gediminas Skyrius, written by Mar­i­ja Kavtaradzė & Titas Laucius and directed by Urtė Oet­tinger, the new Polish-Lithuanian series BFF is a charming comedy about a clumsy bear (Ben), an eager squirrel (Frida) and a cool cate (Freddie). We love Skyrius’ detailed illustrations and the show’s breezy sense of humor which emphasizes the trio’s love for each other regardless of their social and familial differences. Produced by Lithuania’s Art Shot in collaboration with Poland’s GS Animation and Lithuania’s M-Films, the 2D-animated show targets kids five to seven and looks like the kind of show that can easily find its way into viewers’ hearts.

A brave 10-year-old girl named Molly from a small medieval seaside village begins her training as a fighter in Shepherdess Warriors (Bergerès Guerrières) the popular French comics series by Jonathan Garnier and Amélie Fléchais. The graphic novels are the inspiration behind a terrific looking 13 x 30′ show produced in France by Mathieu Courtois and Vivement Lundi! and co-produced by L’Incroyable Studio (Johan Chiron). The project’s tween audience should really enjoy the epic scope and entertaining adventures of this fierce little fighter.

See all the selected projects and register for Cartoon Forum 2022 at cartoon-media.eu/forum.