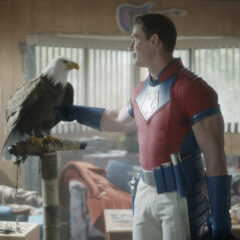 Eagly, the clever, compassionate and lively sidekick to John Cena’s Christopher Smith character in HBO Max’s well-received series Peacemaker, is one of the most popular digital creations of the year. While director James Gunn originally planned to use a real eagle for the show, things didn’t quite work out as planned — and, fortunately, the digital geniuses at Weta FX were available to lend a helping hand or wing.

Weta’s VFX supervisor Mark Gee was kind enough to answer a few of our burning questions about the creation of this memorable bird:

Animation Magazine: Congrats on the great work you and your team did on Peacemaker. What were some of the key concerns you had as you set out to bring Eagly to digital life? 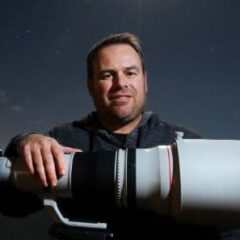 Mark Gee: CG birds are always some of the more challenging things to create. Of course, we had done birds for The Lord of the Rings and The Hobbit movies before, but Eagly was different, because he was featured in a lot of shots. He had to move and behave like a normal bird. He needed to look very realistic, so you couldn’t tell the difference between him and a real bald eagle. So, there was a lot of R&D involved and we had a very short time to do that. The first three months of the project, we were focusing on the Eagly R&D work, working on the feather work, how they collide, the lighting and the shading of the feathers. Things were very smoothly since for Eagly, were able to sculpt him in two or three shots. The rest of the time, he just walked out of the box.

Did his look evolve over time?

Eagly’s look did change over time a little bit. We started off with the garage scene. That was a tough scene to light. It wasn’t ideal lighting, it was very flat. So, it wasn’t until we got into the kitchen scene and the carpark that there’s more key light and we begin to see the features on the character. He kind of looked a little bit like a seagull initially, but once he got into the other sequences, we began to recognize that, and added more American eagle look about him. From then on, his attributes were locked in, and not much was changed since then.

The Weta team had to create a realistic eagle character while also improvising its un-eaglelike behavior. [Splitscreen courtesy Weta FX]

How many VFX shots were involved and how many actual feathers did you have to produce for Eagly?

We did around 900 shots in total for the show, and just over 200 of them were shots with Eagly. Eagly had about 9,162 feathers, a real American bald eagle has about 7,200 feathers. The reason is you start with a basic bird shape — he looked like a chicken at first — and then you have to fill in all the areas. On a real eagle, a lot of those areas that we were filling in was down, more fluffy feathers. We tried that, but it didn’t quite work, so we ended up laying more feathers on Eagly. We started by using our proprietary feather software called Plumage for grooming the feathers, which we had used on previous shows. But we also began using and further developing our new generation feather software called Apteryx to allow us to have more control and realism in our feathers.

How much time did you have to create the show’s VFX work?

We came on aboard in January of 2021 and then worked through November. We had eight episodes and they were broken down to months, basically. The animators did an amazing job, and you could really see [Eagly’s] personality develop as you went through each episode. When you could present it to James [Gunn], he would light up and be happy. It was a very collaborative process between us and James.

So did you look up a lot of eagle footage on YouTube to prepare?

Yes, indeed. It was all YouTube videos of eagles. We found some amazing footage of bald eagles. It was interesting to see the variety of bald eagles and the way they behaved, the subtle differences between them. We picked this one footage from a bald eagle walking on a beach. We did a “Pepsi Challenge” on it. We matched our CG version to that, and James absolutely loved that. That special personality came from that YouTube video. We matched it so closely you can recognize it. We also did a lot of slow-mo studies to see how the feathers react when the eagle is flying with the turbulence under the wings, and we emulate that in our feather system.

We also looked at dogs hanging out of windows with their tongues hanging out, and we used that for a similar scene with Eagly! We had to research how long an eagle’s tongue was and how do you expect it to flap outside. We probably stretched the truth a little bit, but it was the correct length. It was shot in Vancouver in a specific street, and to get our lighting right, we Google Mapped that location and then we mapped our lights according to that map.

Did you learn anything new about the our feathered friends?

Well, we did get to learn a lot about the anatomy and the weight of the eagle, and the way the feathers stick together and move independently of each other. We needed to groom the birds feathers away from the body so that they will sit correctly. We had to simulate them so they would come down, like a vacuum sucking them back, to get the form of the feathers right. The feathers look almost textural. That was something hard to get working, but we managed to simulate it by shrink-wrapping the feathers.

Did you also have a little stuffy on the set to help the actors get the right eye level with Eagly?

Yes, the supervisor on the client side had a stuffy on the set, which was a great lighting reference but it did not look much like an eagle. It actually looked very much like a seagull, but it was really great. The funny thing is that John Cena doesn’t like to perform with an eyeline, so in some shots we had to fudge Eagly to get the eyeline. 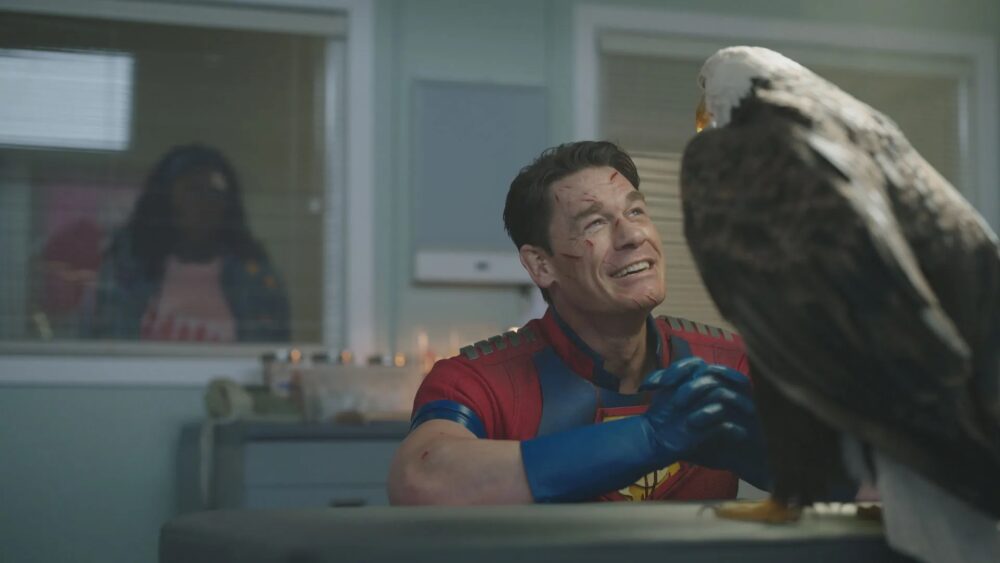 What was the most challenging scene with Eagly?

To be honest, the first sequence in the garage was the most difficult one because there were just so many unknowns. We were still very much in the R&D stage. We had to figure out the reverse angle from behind, Eagly looking towards the Peacemaker. In the early stages, we hadn’t figured out the right vacuum-bag technique for the feathers, so he kind of looked like a Pokémon with scales! It was really difficult to make it work with the scene’s flat lighting. Even though we had much harder sequences in later episodes, that first one was the toughest to figure out in terms of lighting.

You’ve worked on many award-winning features (such as The Hobbit movies, Return of the King, Suicide Squad etc.). Was there a big difference?

I actually enjoyed it a lot. We treated the episodes like sequences, so it kind of works the same way. The demos were kind of the same way. The only problem is that you can’t go back and fix something at the end of the schedule, since that first episode is already cut and done in sound and post. So you just have to hit the mark right there and then. We had a smaller team than a feature. It’s more fast paced, but I quite enjoyed the close collaboration with the artists and filmmakers. 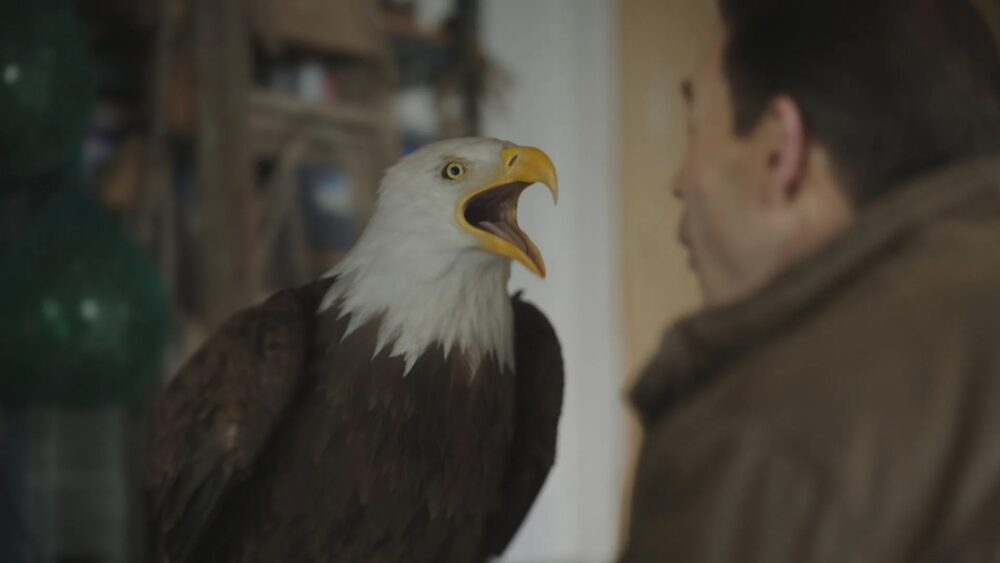 Last question: What is your take on the very busy state of the VFX industry in 2022?

I’ve been in this business for a long time. My career at Weta FX started with The Return of the King in 2003. So, yes, things have changed a lot. There is so much content coming out of the streamers, and the visual effects bar is so high right now. People are creating this amazing work in a shorter time frame than before. I think there’s a lot of work out there, and there’s a lot of competition, and they’re trying to get things done faster and cheaper. That’s not necessarily a bad thing. Overall, there is so much creativity out there, and people are making some amazing stuff, and really pushing the boundaries of our industry.

Based on the DC Expanded Universe character, Peacemaker is produced by The Safran Company and Troll Court Ent. in association with Warner Bros. Television. Season 1 is available to stream on HBO Max. A second season has been ordered.