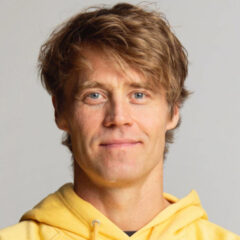 Helsinki-based Gigglebug Entertainment and French studio Zodiak’s new children’s animated series The Unstoppable Yellow Yeti is described as an “offbeat comedy series set in a quirky little town above the Arctic Circle,” and it follows the adventures of three friends: surfer dude Osmok, his energetic cousin Rita and the titular Yellow Yeti. We had the chance to speak with Gigglebug’s CEO Anttu Harlin about his fun new show, which is premiering on Disney Channel (EMEA) this fall.

Animation Magazine: Congrats on the arrival of your new show this fall. Can you tell us a bit about the origins of your Yellow Yeti?

Anttu Harlin: It all started with this awesome six-inch yellow felt puppet yeti that Joonas Utti [Gigglebug’s co-founder/creative director] made on a weekend! The design was stand-out funny and we joked around about what an outcast of a monster this yellow guy would be among yetis, who are supposed to be camouflaged in their environment and never seen. He would even leave these yellow tracks in the snow. And you’d get these kids who are tracking his tracks, wondering about the yellow snow.

So, it was just a bunch of stupid jokes and an awesome character design to begin with. But when we find something simple and funny like that, we think it as a hook that could be developed into something more substantial. We showed an image of the original Yellow Yeti to the Disney EMEA folks at a Cartoon Forum dinner and they laughed as well! They told us to come back when we know more about the stories we want to tell.

What did you love about the premise of the show?

It was full of funny and full of heart. The story we wanted to tell was about a friendship between a monster and two kids who want to have a blast despite of the odd rules of the quirky small town (named Winterton) they live in. Winterton is inspired by ‘Finnish Weird.’ We love to follow rules which makes us seem really straight, and we have a bunch of weird traditions that make us seem insane. Have you ever seen a show where the kids do a sauna competition or take part in compulsory ice swimming event? Finland is so far north, that we usually get cut off from the European weather map!

So, just like us Finns, Mayor Chrome of Winterton has a pipe dream of hosting the Winter Games and putting his town on the world map. But having a Yellow Yeti running around town majorly messes with his world order. The kids get around the rule of “Monsters Not Allowed” by putting disguises on their Yellow BFF.  The town folks are pretty gullible and buy it all. They actually love the wild adventures that the newcomer brings and start to rebel!

When did you start working on it, and how long did it take to deliver?

The was character was born in 2013 and we made a development deal with Zodiak Kids and Disney EMEA in 2015. It took until 2020 to develop, finance and greenlight the show. That sounds like a long time, but the patience has definitely paid off! The production of 50 x 11′ + 11 x 2′ took about two years. Production has been super enjoyable and we are genuinely super proud of the show.

Where is the animation produced?

Gigglebug is co-producing the show together with Zodiak Kids Studio France. We’ve also partnered with Caribara for Toon Boom animation out of Annecy and Montreal. So the crew is split between Finland, U.K., France and Canada.

What was your biggest challenge (besides COVID!)?

This has been one of the most enjoyable productions and the partnerships have been really good! There is a real fandom among the different partners for the show, all the way from executives, writers, voice artists, throughout the pre-production and animation teams until the music and mix. The Yellow Yeti is just someone you want to cheer for and go the extra mile. But going the extra mile has probably been our biggest challenge at the same time, because it can contribute to exhaustion over a long production. So, I would say that pacing ourselves and looking after the well-being of the crews has been the biggest challenge.

Now that the show is ready to air, what are you most proud about?

We had an opening event for 200 people — 100 kids and 100 adults. I was suddenly super nervous about how people outside of the inside team would react. But my heart just melted at the reactions. Kids laughed and loved the show. After screening three episodes and two shorts, we brought out a six-foot mascot of the Yellow Yeti and the kids ran to hug him as if they had seen a celebrity like Justin Bieber or Adriana Grande. That made me super proud, the way that the kids genuinely started to love the Yellow Yeti. You can’t buy or fake that. The love was real.

I am also super proud about the culture we are building at Gigglebug’s studio, having grown to over 100 people. There is a whole generation of fresh talent here now and we just want to keep building on that.

What is your take on the global animation scene in 2022?

We’re just fortunate and happy to have this momentum and to be part of the growth in the animation sector. We’re hiring 60 people this year and ramping up to have three parallel pipelines specializing in 2D comedy.

What do you hope audiences will get out of The Unstoppable Yellow Yeti?

Joy. Laughs. Adventure. Long-term fans. Multiple seasons! And a new character they will recognize and remember. Also, would be funny if someone wants to visit Finland after seeing the show!