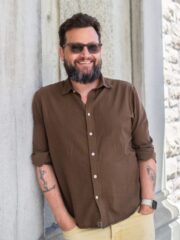 ***This article originally appeared in the Sept./Oct. ’22 issue of Animation Magazine***

Chris Robinson is the longtime artistic director of the Ottawa International Animation Festival and author of many books, including Estonian Animation, Unsung Heroes of Animation, Canadian Animation and Mad-Eyed Misfits: Writing on Indie Animation. He also wrote the award-winning short Lipsett Diaries. Here, he gives Animation Magazine a sneak peek at this year’s much-anticipated event:

To paraphrase the not-so-great George Costanza, “We’re back, baby! We’re back! ”

That’s right: After two years of serving up the Ottawa International Animation Festival (OIAF) in the (dis)comfort of your homes, the OIAF returns to in-person activities this September 21-25.

We don’t dare call it the post-pandemic phase because we all know it ain’t over yet (and, well, the world is going to hell anyway), but we’re at least back on the road after two years parked in a garage.

If the pandemic proved anything, it’s that festivals are better in person. The last two years clearly demonstrated that festivals are about much more than films. They’re about bringing a community of people together to share emotional, intellectual and social experiences.

Okay, enough of my half-assed musings about existence. Let’s get on with what’s in store for OIAF22. Perhaps some of you will be attending for the first time, and maybe some of the veteran OIAFers have gotten rusty and forgotten how to navigate it all.

So, it all starts with the five short competitions (each of them hosted by two self-proclaimed comedians). That’s the core of the OIAF, the essence, the soul. There are feature, VR and series competitions, but the short film is the reason every animation festival worth its beans began in the first place. Festivals exist to provide a platform for artists who don’t otherwise have easy access to an audience.

The competitions are a sort of highly subjective mixed-tape of some of the most engaging animation films being made today. And what makes Ottawa unique is that we don’t segregate. The short competitions feature narrative, non-narrative (i.e. experimental), commissioned (music videos, commercials, ids) and student work. That makes for a somewhat eclectic experience. And sure, you won’t like every film, maybe not even every second film, but you’ll find something that resonates. All of these films will be judged by a jury consisting of Oscar-nominee Hugo Covarrubias (Bestia), Canadian stop-motion animator Terril Calder (Meneath) and Croatian collage artist Marko Tadić.

Oh, and the next day you get a chance to “Meet the Filmmakers” during a session where I moderate discussions between the audience and attending competition filmmakers. It’s a mix of insightful, heated and silly.

Beyond that, we’ve got the Panorama screenings. This is essentially a collection of films that didn’t quite make the cut for competition but that we feel should be seen by an audience. There are also two Young Audiences competitions that are judged by kids. That’s always refreshing because kids’ juries aren’t part of the community and offer blunt assessments.

Now, the OIAF isn’t just about the present and future of animation. Animation’s history is vital to the Festival. You see, quite often films just vanish quietly into the dustbins of history after their festival run (if they’re lucky enough to have a festival run). The OIAF retrospectives and special screenings are a way to keep the past alive and to present works in a variety of contexts. This year, the OIAF is serving up retrospectives of acclaimed American indie (and OIAF22 Honorary President) Amy Kravitz. There’s also a tribute to the legendary Oscar-winning National Film Board of Canada animator John Weldon (Special Delivery). We’ve also got retrospectives of lesser-known voices: Marko Tadić is a Croatian artist/animator whose mixed media works fuse documentary, history and science fiction; Jonni Phillips is an American artist who has quite a cult following in the world of computers, but who isn’t that well known on the animation festival circuit. And our jury member, Hugo Covarrubias, has put together a special screening looking at the rise of contemporary Chilean animation. And while you’re racing about between venues you can explore our Augmented Realities attractions, on display around downtown Ottawa.

The Pulse of the Industry

Okay, now the OIAF is not just about showcasing all that “weird, artsy-fartsy” stuff; there’s a whole industry side to the Festival as well. The Animation Conference (TAC) is a three-day-long conference that attracts producers, recruiters, and assorted studio folks from around the globe. Among the highlights of TAC is the popular Pitch THIS! (presented with Mercury Filmworks), which gives Canadian animators a chance to pitch a series idea to a jury of industry pros. There’s the Animation Exposé, which features a day-long series of talks by artists from your favorite shows and movies. This year, Rikke Asbjoern and Chris Garbutt will offer a sneak peek of their upcoming interactive Netflix special We Lost Our Human.

Hey, but you know what? Let’s get to the most important part of the OIAF: the parties. As I prattled on about before, the OIAF (and any decent festival, really) is about bringing people together from different parts of the world to have some fun and share knowledge and experiences.

Every day at the OIAF, there is a party or social event of some kind; the most well-known of these is the Cartoon Network Studios Animator’s Picnic, which includes the infamous Pumpkin Carving contest. There’s Bento Box’s Salon des Refuses (a chance to watch films that didn’t get accepted into the festival) and, of course, there’s the annual Saturday night bash, NightOwl. This year there’s an extra special treat: Nelvana’s Care Bears’ 40th Anniversary party. I have no idea what this will look like, but I understand that actual Care Bears will be in attendance.

Damn, I’ve gotta stop. They only gave me 700 words, and I’m already over that limit. It’s best that you come and experience it for yourselves. That’s the only way to really understand the beautiful madness that is the OIAF.

Head over to animationfestival.ca to find out about the many other events happening at OIAF22 and then start plotting out what will be a frantic, exhausting, memorable and inspiring week.

Every year, there are so many great screenings, panels, chats, parties and special showcases planned for the OIAF that it can leave a first-time visitor a bit overwhelmed. So, here are some of our picks for the 2022 edition that we think you should definitely try and catch or live to regret it until the next festival comes around!

☑ Check out the some of the best animated shorts (such as Sophie Koko Gate’s Hotel Kalura) by creative artists all around the world at the special screenings. (Don’t worry if you miss one. The kind festival programmers often screen each short twice during the week.)

☑ Get to meet world-class animation stars such as Amanda Forbis and Wendy Tilby (When the Day Breaks) whose new short The Flying Sailor is part of the narrative competition.

☑ Hang out with some of the cool animation students, top animation artists and fellow animation lovers and carve some killer pumpkins at the festival’s popular Animators’ Picnic.

☑ Expand your mind and get inspired by enjoying some very cool non-narrative shorts, such as Sumito Sakakibara’s stunning 360-degree work Iizuna Fair.

☑ Learn more about animation around the world through the festival’s special programs and showcases. This year, Hugo Covarrubias, the Oscar-nominated director of Bestia, has prepared a not-to-be-missed special focus on Chilean Animation.

☑ Look at some of the awesome animated music videos, commercials and ident spots created by the hottest talent around the globe, such as the cool Pharrell Williams’ music video “Cash In Cash Out,” directed by Francis Rousselet.

☑ Find out what the top animation commissioners, buyers, development execs and other power players are looking for at The Animation Conference (TAC), which takes place Sept. 21-23 at the Fairmont Chateau Laurier and various other locations around town. Don’t miss happy hour on the Ottawa River boat cruise.

☑ Enjoy a totally non-mainstream, artistic movie that you’ll probably not get to see in regular theaters the rest of the year! Among this year’s feature selections are Anca Damian’s The Island, Koji Yamamura’s Dozens of Norths, Alê Abreu’s Perlimps, Alberto Vázquez’s Unicorn Wars and Lei Lei’s Silver Bird and Rainbow Fish.