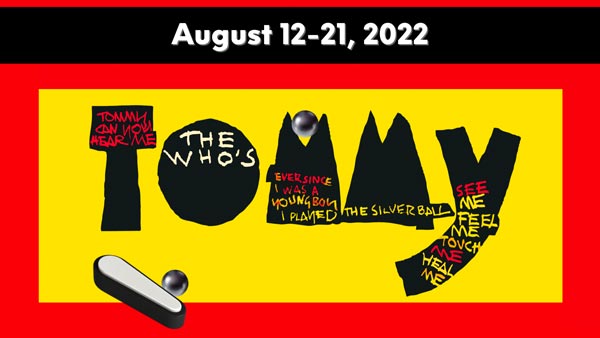 (MANASQUAN, NJ) — Algonquin Arts Theatre has announced the cast and creative team for its August musical, The Who’s Tommy, which runs from Friday, August 12 through Sunday, August 21. A smash-hit on both sides of the Atlantic, Tommy is a powerful tale of a deaf, mute and blind pinball player who becomes an international sensation bursts on the stage in this multi-award winning adaptation of the original chart-topping rock album. Hit songs include “Pinball Wizard,” “See Me, Touch Me.” This show contains adult content.

Tickets start at just $26 and may be purchased at www.algonquinarts.org, by calling 732-528-9211 or by visiting the Algonquin Arts Theatre box office Monday through Saturday, 10:00am-4:00pm located at 60 Abe Voorhees Drive, Manasquan, New Jersey.

Matthew Johnson (Tommy) is 20 years old, and The Who’s Tommy is his first show at the Algonquin theater. He’s a lifelong musician, and has performed in shows such as Mary Poppins and The Outsiders.

Advertise with New Jersey Stage for $50-$100 per month, click here for info

Brendan Flanagan (Uncle Ernie) is grateful for the opportunity to be a part of The Who’s Tommy and to continue learning and growing as a performer. Last seen at the Algonquin in R&H’s Cinderella as The King.

Thomas Krey (Cousin Kevin) is honored to be back on the Algonquin stage after previously appearing in RENT. Thomas’ favorite roles include Edward Bloom in Big Fish, Willard Hewitt in Footloose, and Robbie Hart in The Wedding Singer. Thomas currently attends AMDA’s musical theatre program in New York City.

Maggie Blaise (Gypsy) is beyond grateful to be a part of this unique and exciting production of Tommy. She was recently seen at the Algonquin in Into the Woods. Other favorite credits include: Judy in A Chorus Line, Reno Sweeney in Anything Goes, and Janet in The Drowsy Chaperone (Basie Award Winner).

Jax Terry (10-year-old Tommy) is thrilled to be making his AAT debut! While Jax has been a part of the AAT Performing Arts Academy, playing the roles of LaFou in Beauty/Beast, Charlie Brown in Charlie Brown, Smee in Peter Pan, and Grandpa Joe in Willy Wonka, this is his first full production at AAT. You may have also seen him in the BES production of Annie Jr. (Alfred) or the MHS production of Big Fish.

Jake Ward (4-year-old Tommy) is thrilled to be making his Algonquin Arts Theater debut! He has been a dancer at Dance For Joy for 5 years and thoroughly enjoyed performing with their dance company for the past 4 years. He is eager to study acting and theater and hopes to continue theatrical performances in the future.

Hannah Teza (Sally Simpson) is excited to be back on the Algonquin stage this summer after being away at the University of Delaware as a freshman this past year. Past credits include: Godspell (By My Side), Scrooge (Isabel), Wedding Singer (Julia), and Mamma Mia!.

Kevin Thrower (Hawker/Specialist) is thrilled to be back at the Algonquin and part of this amazing journey. Eternal gratitude to Ian, Mark, and Bridget for their hard work and dedication. Previous credits include Jesus in Godspell, Sebastian in The Little Mermaid, and Shrek in Shrek: The Musical.

Shayne Austin Miller (Minister/Mr. Simpson) is excited to return to the stage after a 20+ year hiatus. Favorite roles; Tony: West Side, Jack: Into the Woods (Kean), Joseph: Joseph/Dreamcoat (TUTS), Schroder: Charlie Brown (CDC) & Spacepunk in Starmites. Shayne was a member of the senior staff at Paper Mill Playhouse for 15 years and founding director of the Paper Mill Playhouse Broadway Show Choir. Shayne currently serves as Director of Marketing and Communications at the Algonquin.

Mads Fernandez (Harmonica Player) is a senior in high school and is proud to be a part of their 6th production at Algonquin. Some previous shows include Elf (Sara) and Godspell (Learn Your Lessons) where they wore overalls… kind of. They are also an active part of their high school drama club where they played Audrey in Little Shop of Horrors, Roger in Rent, and Donna in Mamma Mia.

Advertise with New Jersey Stage for $50-$100 per month, click here for info

Aisa Feratovic (Specialist’s Assistant) is excited to be performing in her 2nd show at AAT! Her first show was Godspell where she sang “Bless the Lord.” She is a rising junior at Drexel University majoring in marketing. Performance credits include: Legally Blonde (Paulette), Les Miserables (Cosette) and Spelling Bee (Rona Lisa Peretti).

Amber Tanzi (Minister’s Wife) is ecstatic to be returning to the AAT stage! A graduate from the AMDA with an associates in Acting, Amber has worked as an actor in New York, Boston, & LA. Credits:  RENT, Spring Awakening, In The Heights & American Idiot (Heather). Amber works as a vocal & piano teacher at School of Rock in Marlboro.

James Chianese (Ensemble) is thrilled to be returning to the Algonquin stage! Most recent credits include: Angel in Rent and Harry in Mamma Mia. James works as a voice and theatre teacher in Florence, NJ at CNJBT.

Nicolás R. Hewgley (Ensemble) is excited to return to the Algonquin for The Who’s Tommy! He was previously seen at the Algonquin in Jesus Christ Superstar. Other notable roles: Jetsam in Disney’s The Little Mermaid (SLTC), Kyle in Legally Blonde (SLTC), and Enjorlas in Les Miserables (WPI – VOX).

Kaitlyn Hulme (Ensemble) is thrilled to be returning to the AAT stage! She was most recently seen in Spring Lake’s Beauty/Beast (Les Filles La Ville). Favorite credits include: Into the Woods (Sleeping Beauty/Dance Captain), Mamma Mia! (Lisa), Annie (Connie Boylan), and The Little Mermaid (Arista).

Leah Krupnick (Ensemble) recently had their professional debut in American Idiot (APTC). Other credits include: Wedding Singer (Phoenix) Superstar and Kiss Me, Kate (Algonquin). Leah also has a number of production credits, including dance captain, stage management and lighting crew for various theaters in the Monmouth County area. Leah took up rollerskating and roller derby during the pandemic and is a proud Central Jersey Roller Vixen.

Willie Naess (Ensemble) is thrilled to be a part The Who’s Tommy at Algonquin Arts Theatre. Previous Algonquin credits include Godspell, The Buddy Holly Story, South Pacific and most recently, Into the Woods where he played Jack.

Stanley Skalecki (Ensemble) is absolutely thrilled to be a part of The Who’s Tommy at the Algonquin! This is his first show ever at Algonquin. Credits include: Grease (Roger), Anything Goes (Moonface), Drowsy Chaperone (Aldolpho) and Little Shop of Horrors (Seymour).

Cassidy Terracciano (Ensemble) is an EMC actress and is absolutely delighted to be back on the Algonquin stage! Her past credits include Mamma Mia! (Sophie), and Into the Woods (Rapunzel).

The Who’s Tommy is presented through special arrangement with Music Theatre International (MTI). All authorized performance materials are also supplied by MTI.

The Who’s Tommy is sponsored by Manasquan Bank.

ALGONQUIN ARTS THEATRE (AAT) is a 501c(3) non-profit center for performing arts, providing cultural enrichment and arts education for residents and visitors of Central New Jersey and the Jersey Shore through high quality performances and programs in theatre, music, dance and film.

Located in Manasquan, N.J., AAT is an integral part of the Shore region, offering broad access to arts experiences across multiple disciplines. Deeply committed to education, AAT serves students of all ages not only through art and music instruction, but also through the unique communal conversation that exists between audience member and performer. A journeyman house, AAT features the work of young and emerging artists, designers and directors working alongside seasoned professionals.

AAT provides a platform for local and regional performers to showcase their work and offers audiences the opportunity to engage very directly and personally in the arts, fostering greater participation and providing an engaging means for exploring personal and societal issues through the world of the stage.

Algonquin Arts Theatre’s programs are made possible in part by funds from the New Jersey State Council on the Arts / Department of State, a partner agency of the National Endowment for the Arts. Funding is also provided by Hackensack Meridian Health, the PNC Foundation, Manasquan Bank, Sunnyside Manor, the Dodge Foundation, the Provident Bank Foundation and the generosity of other businesses and our patrons.