C. Chad Hoffman—”Chad” to his many friends—is best known locally as a bassist for a number of local bands over the years: Section 8 (he was a keyboardist then), Saguaro, Red Eye Junction, Dark 8 Zero, Zen Mountain Poets, and currently Emergency Good Times Band. Since the pandemic sort of wiped out the music industry for a couple of years, Hoffman needed a new creative outlet, and he found it in digital art inspired by the “See America” posters of the 1930s and ’40s and the colorful graphic designs of ’70s pop art.

He’s currently showing a collection of his colorful, iconic-looking posters at Atascadero’s Traffic Records, hanging through July 31. He spoke to New Times over a beer at one of his favorite watering holes, SLO’s Elks Lodge 322. How did he get into poster design?

“When I was in Red Eye Junction, I watched [lead singer and guitarist] Reid Cain create posters for shows, and I thought, ‘Wow, that’s bitchin’.’ Then when I was playing with Zen Mountain Poets, I started making posters for our shows. They pretty much let me have free rein to design what I wanted, so I’m basically self-taught.”

A lot of band posters trend toward the pedestrian—a photo of the band is often the central theme. Hoffman had other ideas, trying to find a quirky image that would pull a viewer in: “If you can draw them in, then they’ll think, ‘Maybe I’ll check it out.'”

Soon, however, live shows—and the need for posters to promote them—dried up.

“Everything started shutting down and we weren’t playing much, and I had to do something creative, or I was going to go crazy,” he recalled. “I got into the posters in 2020 and 2021 when things were dark and depressing for so many. I wanted to show there was still beauty in the world despite the civil unrest and lockdowns. I used super bright colors, and it was therapy for me. Better than taking anti-depressants. There’s still beauty out there. I’d go to a place, put some music on, take some shots, and then go home and work on the images.”

Hoffman takes his photographs on his iPhone and imports the images into Adobe Photoshop editing software, where he first transforms the image to make it look like a painting or screen print. He manipulates color, sometimes adds graphic elements like the starburst sky in his poster of San Luis Obispo, and then adds the text on top. 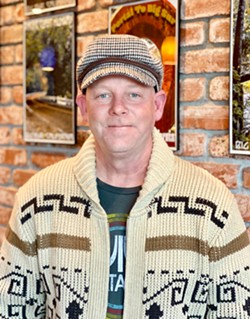 Hoffman’s wife, Cory Bauer Hoffman, sometimes helps him with the color design. She worked as a professional make-up artist on America’s Next Top Model hosted by Tyra Banks, so she has an eye for color. At his wife’s encouragement, he eventually took a beginning Photoshop class at Cuesta College—his only formal instruction.

Photoshop is an amazing tool, but its powerful versatility is both a positive and negative—it’s complicated and takes a long time to become wholly proficient.

“It can get overwhelming, and if I get stuck at one point, I might scrap it and start all over again,” Hoffman admitted.

Does he ever contemplate stepping up to a higher resolution digital camera?

“I think the iPhone is adequate for what I’m doing right now,” he said, “Since I’m making it look like a painting, a little more grain or a little blurriness fits.” It should probably be noted that Hoffman considers himself an “extreme introvert who does not like a lot of attention upon me,” which is why he switched from keyboard to bass. “If I do my job correctly, no one will notice that I’m there. They’ll feel the rhythm, yet the focus is on the lead singer or lead guitarist, but I am quite ecstatic and honored that folks might like to know what I do creatively.”

If he keeps putting out these amazing posters, he might have to get used to a little more attention. Hit up Traffic Records, peruse Hoffman’s website, Facebook, or Instagram, and soak up the colorful, iconic work of this self-taught but clearly talented visual artist.

“People sometimes ask me if I worry about running out of things to photograph, and I always say, ‘No. All you have to do is look around. Great images are everywhere,'” Hoffman said. Δ